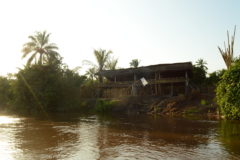 In 2017, Human Activities and the plantation workers’ art league Cercle d’Art des Travailleurs de Plantation Congolaise (CATPC) celebrated the Repatriation of the White Cube. A quintessential White Cube, designed by OMA, was built and inaugurated on a former Unilever palm oil plantation in Lusanga, DR Congo. With the establishment of the White Cube, the mechanisms through which plantations underwrite the art world are reversed. The white cube attracts the capital and visibility needed to invent a new ecological and economic model on site: the post-plantation.

With the repatriation of the White Cube, Human Activities and CATPC aim to bring back the privileges associated with the art world to one of the plantations that has historically funded the establishment of western museums, and prove that artistic critique on economic inequality can effectively reverse that inequality.

The collaboration has set a new precedent: plantation workers successfully employ the concept of the ‘white cube’ to acquire the visibility and capital needed to buy back their land from international corporations.

“In short, the project, de-exoticizing and re-exoticizing, is politically problematic on almost every level, and it’s fascinating for that reason. It raises questions about imbalances of power based on race and class that are at the very foundation of modern Western culture, but that our big museums have resolutely refused to address, never mind tried to answer.”

Early success came in 2017 with CATPC’s first solo exhibition in New York’s SculptureCenter, an exhibition that was hailed by the New York Times as the most challenging show of  the year. The same year CATPC inaugurated their own white cube: a museum designed by OMA’s David Gianotten, built on their newly purchased land, which functions to bring capital, visibility and legitimacy to Lusanga.

The film White Cube (2020) marked a new beginning: how the concept of the white cube – with all the privileges it stands for — can be repurposed by plantation workers as a vehicle to buy back their land and begin a new inclusive and egalitarian world. As CATPC member Mathieu Kasiama said: “We must not stay in one place. We must spread out. We must take back all four corners of The Congo.”