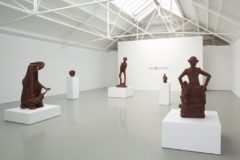 In 2012, the Institute for Human Activities (IHA), a foundation established in the Netherlands, Belgium and the Democratic Republic of Congo, began ‘A Gentrification Program’ on a former Unilever plantation, 800 kilometers from Kinshasa, on a tributary of the Congo River.

The IHA asserts that even when art critically engages with global inequalities, it usually brings beauty, jobs, and opportunity to the places where such art is exhibited, discussed and sold. Now, however, artistic critique on inequality will not stimulate gentrification in London, Venice or New York, or even hipster neighborhoods in Kinshasa, but inclusive economic growth in one of the boiler rooms of the production of that very inequality. As Congolese plantation workers cannot live off plantation labour, they will now live off critical engagement with plantation labour.