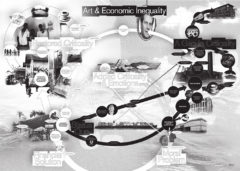 In the transfer of critical art from a zone of intervention to a zone of reception, a gap seems to arise. This gap is remarkably similar to the division between labor and profit in other globalised industries. Rather than ignoring this current state of affairs or treating it as an unwanted side effect, art can accept the terms and conditions of its production and forge a new, more radical criticality, which turns art’s potential for gentrification into a progressive and effective tool. Therefore, the IHA seeks to make capital accumulation a core strategy for artistic intervention.

The IHA aims for a reverse gentrification program. While on the one hand much new art deals with all kinds of economical issues, and wants to be very critical of them, on the other hand the economic return of such art is hardly in the same places as what is critiqued. Art may expose the need for change in say Nigeria or Peru, but in the end it generates an economy not in the places it critiques, but improves living conditions and real-estate value in Berlin-Mitte or in the Lower East Side.

To counteract this situation, the IHA tries to generate capital in the area of its Research Centre in Congo. This is a form of reverse gentrification. Geographically it is reversing the cash flow that is normally extracted from these plantations. And socially it is not pushing away the lower class, but fully integrating them in a post-Fordist economy.