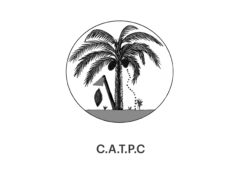 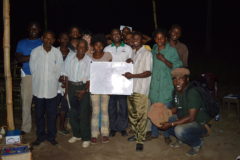 Since 2014 the Cercle d’Art des Travailleurs de Plantation Congolaise (CATPC) collaborates with the IHA to set-up the Research Centre for Art and Economic Inequality. It gathers members from cocoa and palm oil plantations in various parts of the country and aims to remunerate the contribution its members make to the world, beyond barely paid labour.

The sculptures of the members of the Cercle d’Art are reproduced in Belgian chocolate originating from a plantation that employs several CATPC members. These chocolate sculptures are then sold worldwide in prominent art platforms and the IHA’s web shop. This has led to an increase in income of 7000% per gram of chocolate sold for the members of the CATPC. Half of these profits are evenly distributed between individual members, and the other half invested in community projects.

René Ngongo
René Ngongo is an environmental and political activist, former director of Greenpeace Congo, and president of the Committee of Environment and Natural Resources of the Congolese Social and Economic Council. In 2009, Ngongo received the Right Livelihood Award, known as ‘the alternative Nobel Prize’, for “his courage in confronting the forces that are destroying the Congo’s rainforests and building political support for their conservation and sustainable use.”

Eléonore Hellio
Eléonore Hellio has co-founded many international participative art project in DRC since 2006, she co-initiated the afrofuturist concept Kongo Astronauts with artist Michel Ekeba. She is an active member of SPARCK, Space for Pan African Research Creation and Knowledge. As the CATPC executive director, she leads day-to-day actions to strengthen the understanding and to question the critical curriculum of this multi-layered project.

Mega Mingiedi
Mega Mingiedi lives between Strasbourg and Kinshasa. He has studied at the Institut des Beaux Arts de Kinshasa and the Académie des Beaux Arts de Kinshasa in the Democratic Republic of Congo, as well as the Ecole Supérieure des Arts Décoratif in Strasbourg, France. His work straddles the boundaries of drawing, collage, performance and video art. Mingiedi is best known for his large installations in which he maps, destabilizes and radically rethinks the urbanization of large cities such as Kinshasa, Johannesburg, Dakar, Paris and Strasbourg. He is co-leading the CATPC workshops.

Mathieu Kasiama
Born in 1979, Mathieu Kasiama is married and has four children. He makes 10 dollars a month as hairdresser. In his words: ’‘I haven’t studied, I can read nor write. I wouldn’t have guessed that one day I would be making art. I’m a fresh participant, but I have been around art since I’m little.’’

Mbuku Kimpala
Mbuku Kimpala is 20 years old, has three children and is currently awaiting her forth. She thinks of her sculpture work as a way of sustaining her family, helping them to pay the rent, water and school fees for her children. Her first work was an auto-portrait: a naked woman, proud of her beauty as a creation of God. Her sculpture represents the nudity of all the women in the world.

Emery Mohamba
Emery Mohamba has learned sewing, in order to have his own business next to his wife’s manioc trade. He is the father of eight children. On his work with the Cercle d’Art: ‘’When I saw the Congolese Franc banknotes, I saw sculptures on them, but I didn’t understand their importance. But when I made sculptures myself, I saw their power and understood that they could bear a valuable message. That’s why I’m sending messages through my sculptures to share our troubles.’’ Djonga Bismar
Bismar sees working with the Cercle d’Art as a chance to learn something that might make his life easier. If he had to stop now, he says, he would feel like he hadn’t achieved anything. Bismar created the statue The Spirit of Palm Oil (2014) and collaborated on The Art Collector (2014). His works reflect joy as well as sorrow.

Cédric Tamasala
Cédric works on a farm with pigs and rabbits, but also trades palm oil from his town to Kikwit and then to Kinshasa to make a living. He reflected on the life of his family with the sculpture ‘How my grandfather survived.’ It represents a figure that could be a priest or Leopold II, who professes to a young Congolese child that he should do away with his wealth and traditional sculptures. The book they are both holding reads in gothic type ‘heureux les pauvres’.

Daniel Manenga
Daniel Manenga is a smith and a farmer, but also trades palm oil. He recounts: ‘‘I had never tasted chocolate before, and for the first time in my life I had the chance thanks to the CATPC. But mostly my sculptures can now reach people that I will probably never meet, people to whom I could never talk to show them how we live here.’’

Thomas Leba
Although Thomas was blessed with his father’s intuition for hunting, he studied woodworking before becoming a carpenter and a farmer. He has made the sculpture ‘Poisonous Miracle’, that renders an allegorical scene: a grandmother, that is bitten by a chameleon in the forest is subsequently found to be possessed by evil. Blisters spring up on her skin but later miraculously transmute into flowers.

Jérémie Mabiala
Jérémie was born in 1950 in the Tshela region of Bas-Congo. He has learned the carving of wooden sculptures by his father and later travelled through Congo to sell his work. He now works as a farmer of cacao, coffee, rubber and palm trees. Together with Djo Bismar, he made the sculpture The Art Collector, that has been turned into a much bigger size with the help of every member of the Cercle d’Art.

Armand Mbudikienda
Armand  alias Meya was born in 1938 in the Tshela region of Bas-Congo. He has learned the carving of wooden sculptures for five years with Mister Alphonse Nzau. Later on he has had his own atelier, training a dozen people. Producing around 200 kilos of cacao a year, he divides his time between farming and carpentry. Together with Mathieu Kasiama he has made a sculpture that represents a cacao farmer who can’t get around to make enough money to have a cyst treated, that stretches from his knee to his head.